My memory of the relentless winter of 2018 will be that it continued on and on, vengefully adding that one little ice storm the second week of April. However, I was on a countdown to leaving for a week-long escape to Mexico. The weather may have been hard to ignore but I was dreaming of not being weighed down by layers of coats and sweaters and feeling the sun on my skin.

My husband Scott and I have been traveling to Mexico since 1992, which means 26 years of exploring the interior through public transportation such as bus, collectivo, and train. We will never forget that first trip when we took the train through the states of Michoacán and Leon, stopping in Morelia, Patzcuaro, and Guanajuato, then traveling back to Mexico City where we caught the train to Oaxaca, meeting lifelong friends Robert Forman and Robin Schwartz. There are so many stories about these years of travel and changes within Mexico, such as the discontinued train service and increased flights to outlying regions, but I’m getting caught up in the past – what I am writing about today is escaping to a place that is filled with art and communities that engage with art that focus on enjoying a good life.

This time, we had initially planned a trip to Mexico City, but hearing that our friends Rick and Oscar had never been to Oaxaca, we all booked an extra flight to Oaxaca to share travel experiences of Oaxaca.

When I remember our travels, the best discoveries, most delicious food, and stunning art comes to mind. However, I am no romantic. I also remember the difficulties and challenges, like navigating one of the largest airports in the world with poor directional signage. Departing from Mexico City that morning, there were several lines filled with epic switchbacks of humanity pushing huge, bulging suitcases. We made our way into the right line creeping along for 40 minutes and just as we made our way to the fourth set of switchbacks into the bag check area, we were pulled from the line by an airline employee announcing, Oaxaca! As the lines re-organized themselves into those traveling to Oaxaca and those going elsewhere, we realized another 30 minutes had passed and the boarding time was 30 minutes away. No worries, we thought, all we have to do is check this suitcase and go through security.

After checking the suitcase, we were told to go through the security line directly next to us – we were stunned to see the line snaking down to the end of the terminal. We gamely walked to the end of the line when we heard a shout, “Oaxaca” and an airline employee ran up the ramp leading 25 persons at a brisk trot. We ran after them for around ten minutes and saw that we had been led to the International boarding security gate with fewer people in line. We made it through security and looked around – all of our fellow runners for Oaxaca were gone and we now nervously looked for our boarding gate called “T1.”

At the Mexico City airport, all the gates are numbered – we asked airport employees where gate T1 was, they thought there was a language error and checked the reader board – yes, T1. Some of the airport staff pointed in a direction trying to be helpful, others pointed in the opposite direction – we ran and ran, back and forth, and my step tracker recorded over two miles in that terminal. Finally, we found gate T1, upstairs one-half floor next to a pizza franchise – the gate had closed two minutes prior – we had missed our flight.

That was when we discovered there were not many flights to Oaxaca, at least not that day. We could have bought a one-way ticket for four times the price on a major airline, but that didn’t seem like a real option. All of our past travel experience had given us the tools to get to Oaxaca today – we took a taxi to the TAPO bus station and boarded an ADO bus to Oaxaca at 11:00 a.m. The seven and a half hour bus trip seemed somewhat bitter, but we thought at least we’d be in Oaxaca tonight in time for dinner. 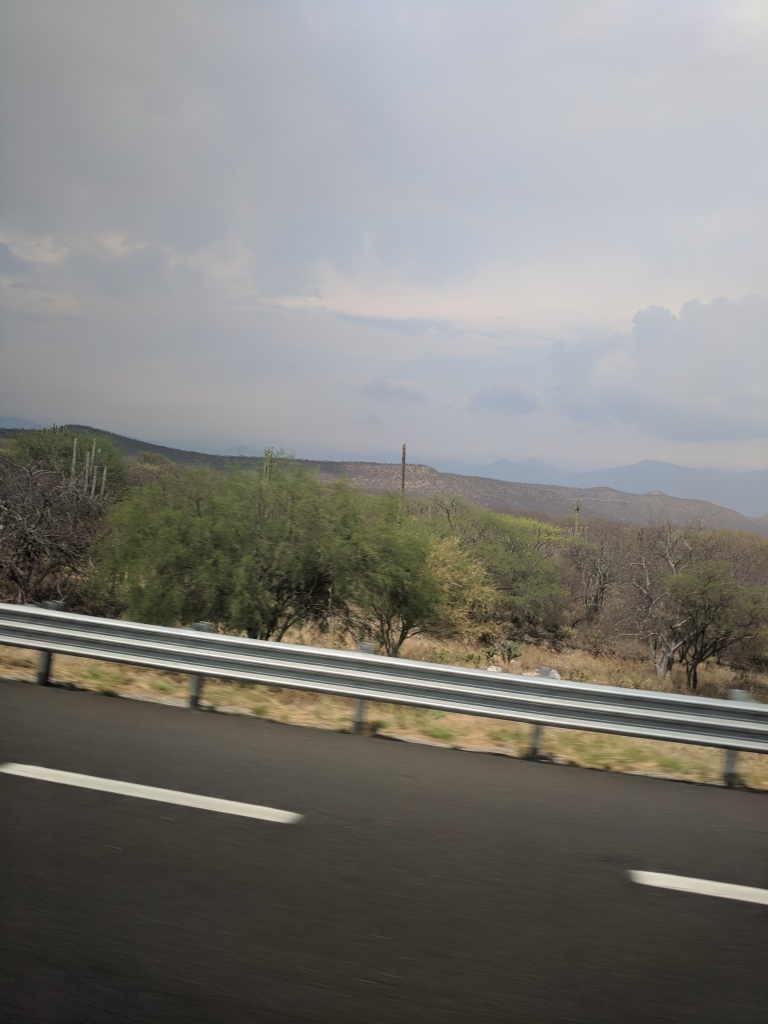 The ADO Executivo bus service is clean and rather spacious, with reclining seats, restroom, and drop down screens with fascinating movies on them. As we traveled further south from Mexico City, we enjoyed the scenery of the high desert near the area of Tehuacán, seeing Joshua Trees and desert flowers similar to the area of Southern California where we all spent our childhoods.

The final few hours of the bus ride takes you over a windy mountainous road – about 30 minutes into this road our bus driver pulls the bus over, stops and gets out of the bus. Sitting at the back of the bus, I see him open an engine cover and have a discussion with another man – I thought, this can’t be good. The driver gets back on the bus and tells us that the bus cannot go onward due to mechanical difficulties. He will try to contact ADO bus company to have everyone picked up.

One thing I have noticed as a traveler in Mexico is when news like this happens, people may be disappointed, but there is a communal sense that we’ll all get through this just fine. People got up out of their seat and strolled about outside, unpacked snacks, and we admired the moonflower bushes and rock cliffs on the roadside. We watched our bus driver try to scramble up a rock cliff in a valiant attempt to get a signal on his cell phone to make that phone call.

Another thing I have noticed as a traveler in Mexico is that everyone will work together: the bus driver flagged down passing buses and everyone stopped to find out if they could help, take some passengers, or promise to call someone when they got to Oaxaca. The remaining passengers began to diminish as they got seated on each passing bus. After several buses stopped we were finally squeezed into a bus that delivered us to a station in Oaxaca a couple of hours later.

While this was not the adventure we had planned, we met some new people and had good conversations, like Quetzalcoatl (just call him Quetzal) who is studying to be a medical technologist and was going home for a holiday, or Sara, the young Australian woman traveling to Oaxaca for the first time by herself. When we finally arrived at our lodgings, we felt fortunate and looked forward to dinner that night in Oaxaca.

All photos in this essay by Linda Marston-Reid, copyright 2018.

View all posts by Linda Marston-Reid