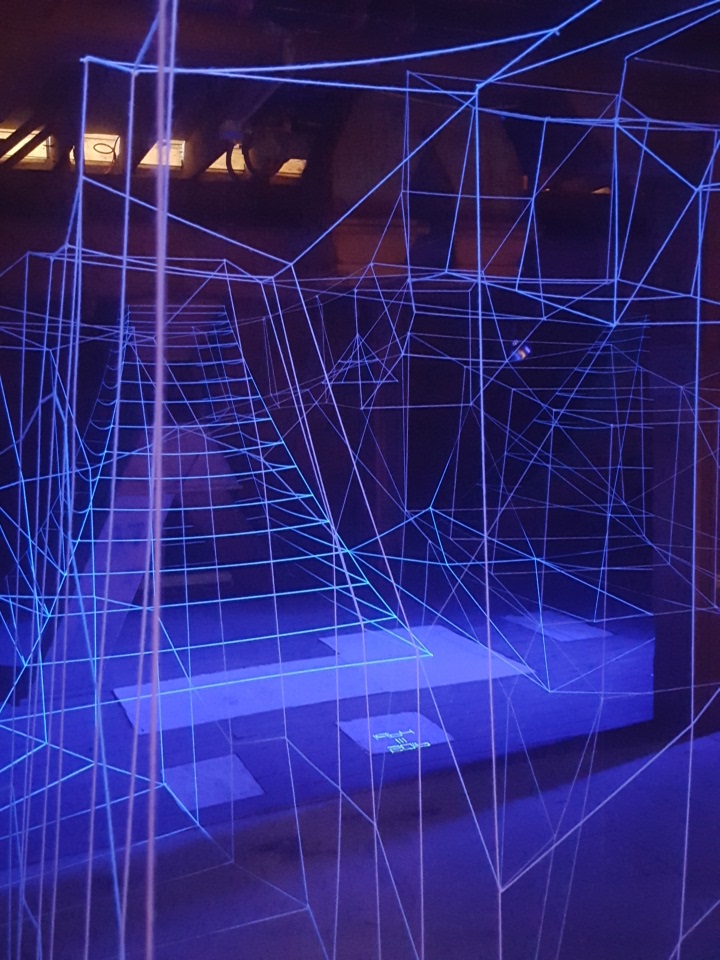 The title for Wassaic Project’s 9th Annual Summer Exhibition, Appetite for Destruction, is taken from an artwork of the same name by Robert Williams, a California-based artist that was at the forefront of psychedelic, apocalyptic artmaking. Williams’ painting was selected originally for the cover of a Guns N’ Roses album, but after its initial release was banned in record stores, forcing the album reissue with his art inside the album and a new image on the cover. Although that was 1987, apparently art still had the capacity to shock and provoke strong reactions.

Appetite for Destruction at the Wassaic Project’s Maxon Mills exhibit space takes a more measured approach. The works on display by contemporary emerging artists focuses on the artists’ interpretations of the untamed world – whether that world is the outdoor landscape, the built environment, or the imagined. The annual exhibit is important to present emerging artists’ work, building reputations and allowing artists to experiment and take risks with their art. Of the 56 exhibited artists, 45 are alumni of the Wassaic Artist Residency, where artists can live and make art in Wassaic during their residency period.

This year there are exhibits installed on the grounds that can be spotted before visitors enter the space. The exhibition space is a seven-story grain elevator with artwork installed at every level. On the first floor, visitors are greeted by David Grainger’s larger than life sculpture, “Dear in Headlights.” A manufactured forest and the sound of water encourage visitors to explore an installation by Jen Catron and Paul Outlaw, featuring a boat in a built stream surrounded by vegetation. The artist statement described the installation as “influenced by belief systems and how they related to visions of the future.” 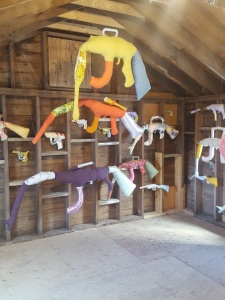 The third level is an installation of Natalie Baxter’s “Warm Gun” series. Natalie stated that she “learned from her Appalachian grandmother to create soft objects that challenge feminine ideals, gun laws, and violence.” The next level has an interactive exhibit by Gregg Evans featuring 12 photo panels on three shelves. The artist encourages visitors to rearrange the panels to create a new story, demonstrating how art can be re-interpreted by its surroundings. 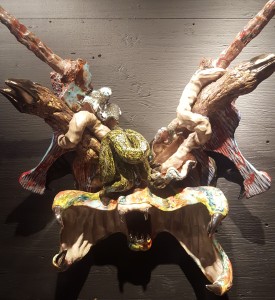 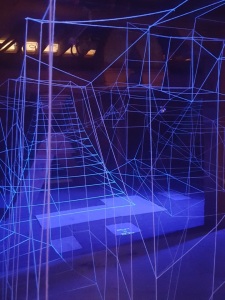 Continuing up the stairs, Holden Brown’s “Stairway to Heaven” installation will invite you to ponder the pure white stairs cordoned off by a rope. The artist stated, “My work is about fantasy and unfulfilled desire. It addresses the human pursuit for utopic perfection and the images we associate with the idea of “Utopia.”

He used Google to search for images related to “Stairway to Heaven” and “Utopia.” Facing the installation, visitors could see an open door at the top of the pure white stairway, a blue sky with fluffy white clouds slowly moving, visible through the open door – a heavenly choir completing the utopian scene. Visitors may wonder if they will be allowed to pass beyond the blue velvet rope.

Appetite for Destruction at the Wassaic Project’s Maxon Mills is located at 37 Furnace Bank Road, Wassaic. Exhibit up through September 18, 2016.

This essay (in an edited form) originally appeared in the Poughkeepsie Journal’s Enjoy section, September 9, 2016.

Some samples of the hundreds of murals in Zaachila. #mexicanmurals #artepopular #festivalhacerarte
Today in Oaxaca it is Noche de Rabanos (Night of the Radishes), a tradition practiced over 120 years. Hundreds of people lined up to see the fantastic diaramas carved out giant radishes. Corn husks are the latest material used in the competition. Further up the street you can try your hand at carving. #nochederabanos #oaxacatraditions
It was a bustling scene today at the Tlacolula market. #oaxaca #weliketocook
Dutchess Handmade is open filled with wondrous gifts and original collectibles. Stop in and enjoy the selection and meet some of the artists and makers. #dutchesshandmade #HudsonValleyArtists #shoplocal #buyartfromartists #togetherwecreate
Excited to be here at the 2019 Ulster County Hispanic Heritage Celebration honoring Hispanic individuals from Ulster County. #HonoringHispanicCulture
Oh yeah..... #civicengagement #earlyvoting